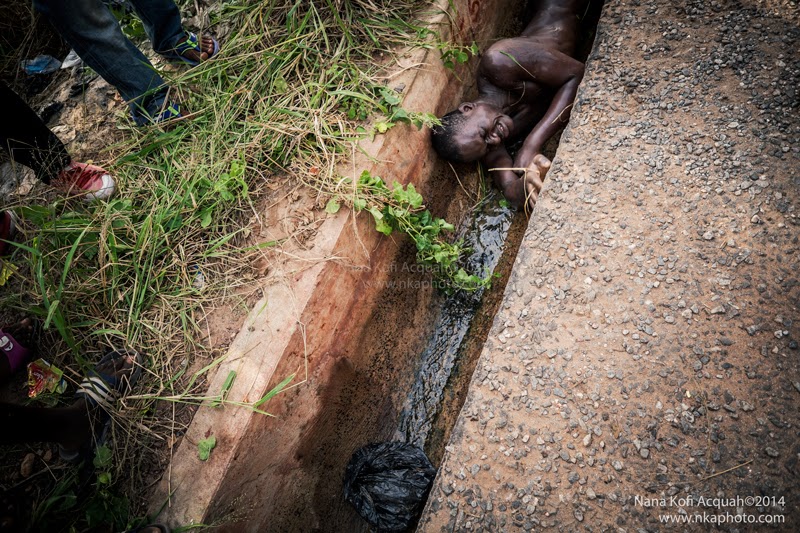 This morning, I woke up with a headache. I asked my wife if she could drop the kids at school. She said yes. I took one look at her tired face. I changed my mind. I wobbled out of the couch where I'd spent the night and went looking for a pair of shorts. It is just another day. The kids got into the car, and off we went.

The road from Kokrobite to the famous old barrier is not one designed for cars. It feels more suited for horses and antelopes. My kids were singing "Lala lala la" in many different renditions, which didn't necessarily harmonise with the clanging and tinkling sounds seeping out from the bottom of my car, as it kissed each pothole I couldn't swerve. Most mornings are like this. 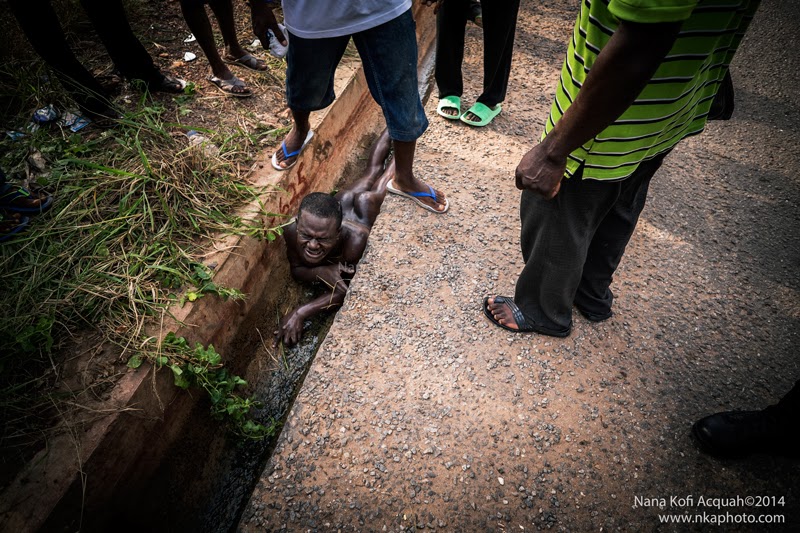 In the midst of this monotonous morning, one big distraction happened. Up the hill that leads down to the old barrier, I saw a group of people gathered around a naked man lying in a gutter. I quickly sped on to prevent my kids from witnessing the horrible sight. Fortunately for me, they were too engrossed in their song.

On my way back, the size of the crowd had increased. A police man, on a dilapidated motorbike, who had sped past me had already arrived at the scene.  When I got there, he was talking about how three of these robbers had robbed and raped a young married woman in the neighbourhood recently.  He was furious that the guy was still alive. He started tapping his pockets, looking for something. Finally he ended our curiosity by saying he was looking for his pepper spray. He wanted to spray some into the thief's wounds so he can feel pepper. Shortly after his rants, the police truck arrived. They, obviously were disappointed that the thief was alive. One of them yelled at the crowd: "Why do you guys keep doing this? If you've caught a thief, why don't you just kill him? Why do you beat them half-dead and then dump them on us? If you had killed him, all we'd have to do is dump him at the mortuary!" 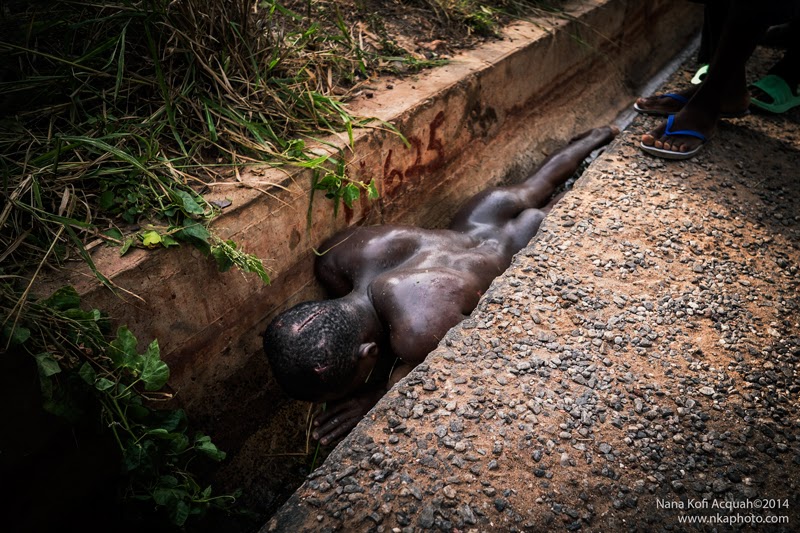 I asked the people around if any of them knew for certain that the guy was a thief. None knew for certain but they all agreed he definitely looked like one. They said he had been dumped in the gutter around 2am. He had been calling for Joyce to come to see him before he dies. I wondered who Joyce was?

I didn't hear him utter a word whilst I was there, so everything I heard, I heard from bystanders. One guy said he had been robbed recently; and if the Police hadn't arrived he would have dropped a cement block on the thief's head. He said most of these thieves come in the afternoon when the neighbourhood is quiet and everybody is at work. Another lady said this particular thief had come to spy the neighbourhood out recently. He had come to eat at one of the "chop bars" around and an old man, had warned them that the guy looked evil. 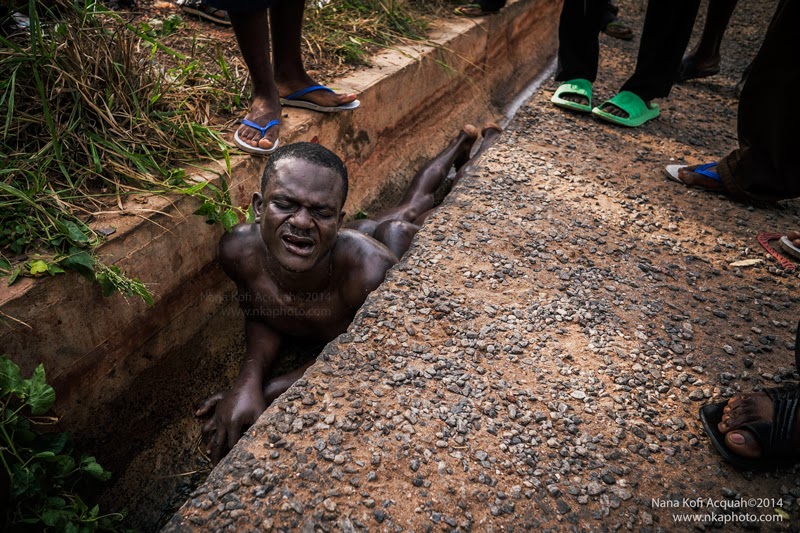 There are two main reasons why people take the law into their hands: When they can't trust the system; and when they know they can get away with it. I believe the pursuit of justice is innate and we all would love that the bad nuts in society are properly punished for their crimes but I hope more people will pause for just a second before they hurl a stone or knife at "a thief" and ask themselves: "What if he isn't a thief?" 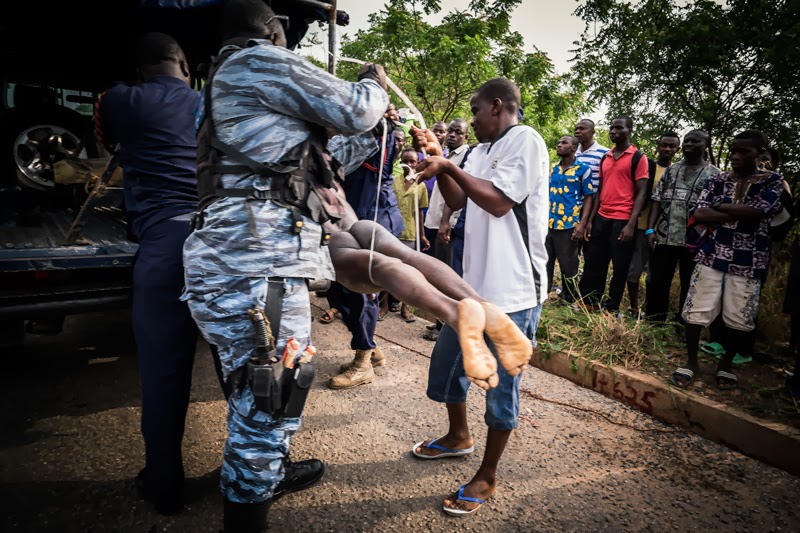 About 17 years ago, I was nearly lynched at North Kaneshie, in Accra, where I had gone to visit my friend Patrick. I was in a batick shirt. A young girl screamed in my direction and said: "There he is! The Thief!" I had the presence of mind not to run and look at the girl. She took another look at me and said "Oh, that's not him but the thief is also in a batick shirt". Fortunately for me, that incident happened at noon, so she could properly make me out. Imagine if it had been at night. Imagine if I had panicked and started running. Imagine how many innocent people get killed in the gutters and streets of Africa everyday because someone mistook them for a thief?
Just for the sake of the one person who might be innocent, we need to stop this barbaric, lawless act of jungle justice.  All God's children deserve justice.
at February 20, 2014 13 comments: