Ghanaian Culture: What Must Go, And What Must Stay? 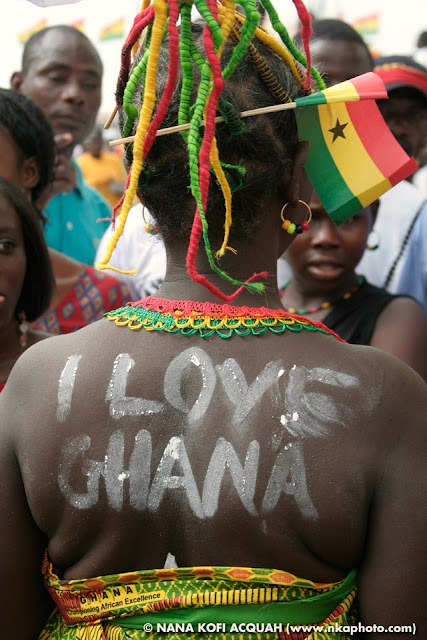 A couple of years ago, a European photographer friend of mine started a photo project called The Last Kings of Africa. He moved from country to country, city to city, village to village documenting the last vestiges of ancient African royalty.  It saddened me to observe through his photographs, that so much has been lost. It isn’t only authentic African royal traditions that have been almost wiped out by Slavery, Colonialism, Christianity and Islam.  I believe the single most important damage done to Africa, is the wiping out of identity; and with that also, our confidence.

I grew up attending schools that had “Do Not Speak Vernacular” written all over school compounds, and students who were found to be speaking their mother tongue, got into big trouble. Today, I am struggling to get my three little children to speak my mother tongue or any other Ghanaian language for that matter. If I don't do anything about it, my grandchildren may have no idea what "koobi" is.

As a people watching the total annihilation of everything that once defined us, I can understand the pride and excitement that occasions like the on-going funeral in Kumasi evoke; and I appreciate the passion with which we defend our culture; and we must defend whatever is left otherwise children like mine will grow up and become as bats (neither bird nor fox).

Our people say “The only thing that never changes in life is the fact that a woman’s breasts will fall over time”.  In other words, the only constant in life is change. I am advocating for slight changes to our cultures, in view of the times we live in, and the futures we want to create for those who will come after us.

For eons of years, it’s been the tradition in many cultures (not just in Africa), that the rite of passage from boyhood to manhood would involve the killing of wild beast or even a fellow human from another tribe.  In the Bible, this startling account is recorded in 1 Samuel 18 “David took his men with him and went out and killed two hundred Philistines and brought back their foreskins. They counted out the full number to the king so that David might become the king's son-in-law. Then Saul gave him his daughter Michal in marriage.”   He was asked to bring one hundred foreskins as brideprice and he shows off by doubling the number. Two hundred men, each one someone’s precious child, lover, husband, father, lost their lives because a young man wanted to get married.  Today, when I see a photograph of The Asantehene sitting on his beautiful throne, with his gold laden legs resting on lion’s hide, it disturbs me.  It may not even be a real lion. The lion may have been dead for thousands of years. It disturbs me because it reenforces our in-grained belief that greatness and masculinity must come at the expense of other lives, especially wild life. I believe that fundamental belief, is what leads bored dentists and young Trumps still trying to find their masculinity to pick up guns and shoot lions and other wild life. If I had the money, I would order a lion’s head sculptured from gold and offer that to the great king as his footstool.  Ghana, a country that had lions roaming around half a century ago, today cannot find even one live one. In fact, a lot of family totems are creatures that can’t be found today or are extremely rare to find.

Funerals is another area where I’d like to see some change. We don’t have to abolish the core aspects but can we tone down the opulence? I think royal funerals should go on for as long and can be as grand as a kingdom wants. If they can afford it, they should. It after all, is one occasion where the people come together. The challenge I have as a Ghanaian is, I see families sell off properties, heirlooms and redirect school fees and capital into lavish funerals, sometimes hoping there will be enough donation to help cover cost. Many families have been destroyed by funerals.  It is in light of the negative effects of lavish funerals, that I request that we set a royal example. What example can our leaders set, to make us know that it is better for us as a people, to invest in the living more than the dead? I am a firm believer in the fact that we can tone down without touching the grandeur, pomp and richness of even royal funerals.

Finally, I’d want to say that we are a great people with rich history. We must never forget that. When I asked the famous Kenyan author, who also writes in his mother tongue, Ngugi Wa Thiong’o, how I can get my children to speak my mother tongue, his advice was simple: “Keep speaking it to them”.  In other words, as the leader of my family, I each day get to set example of where I want us to be headed.  Leadership must hold on to the roots for support but must always reach out to touch the sky.  Africas leaders, be they traditional or political must always show the way. Leadership cannot give a particular tune, and expect the people to sing something else.
As important as it is to really know and showcase where we are coming from, it is even more important to ask “Where are we headed?”.

This is very insightful.We should never throw away our identity and pride.