Africa will rise. Africa is rising. 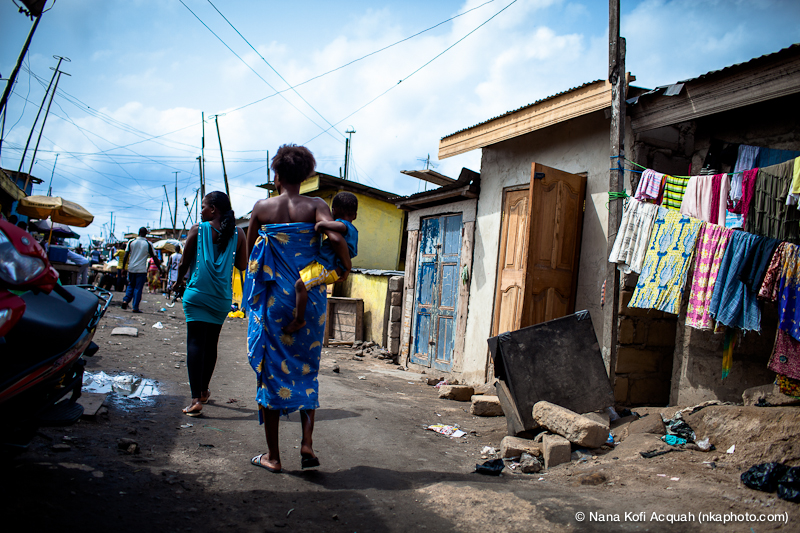 I have been working for a while in Accra’s biggest slum; officially called Old Fadama but notoriously known among the citizenry as  Sodom and Gomorrah. Whenever I am there working, it is really not poverty and destruction I see. What I see, is a lot of hope and an all out war against poverty; against systems, against political and economic wickedness in high places designed to keep them down; against lethargy, against fate. 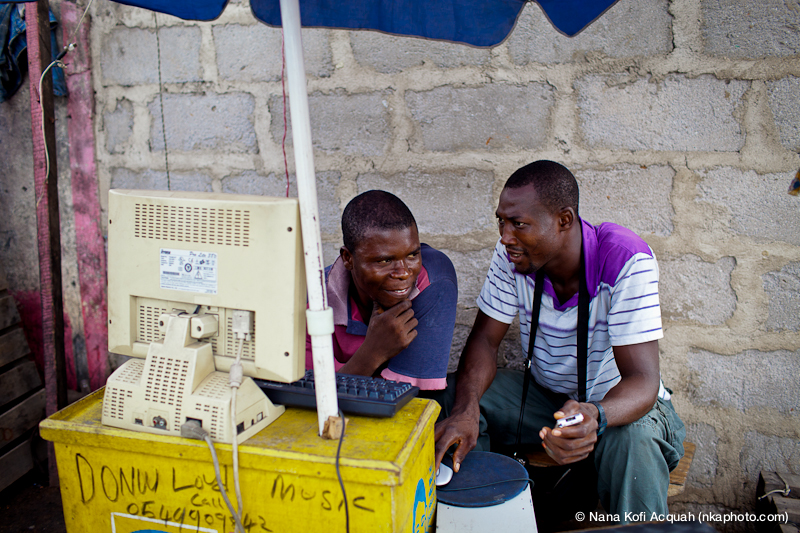 Majority of the people here are migrants from the Northern parts of Ghana. They have abandoned lands and spouses and the familiar to come and wrestle their fair share of the national cake from the gluttonous. If the Accra Metropolitan Assembly doesn’t come after them, the rains do. If the rains don’t come to torture them, fire does; and yet they rise. I was told by my fixer that “if fire burns down a wooden house today (most of the houses are wooden), by tomorrow they build a new one. I don’t know where they get the money from”. 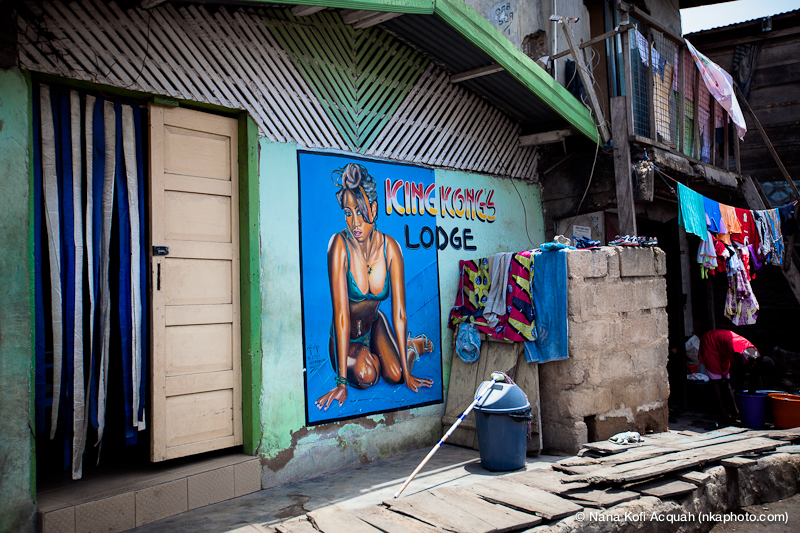 On my last visit, after doing a couple of portraits and we were heading out of the community, a young man who was playing oware with his friends suddenly had an epileptic seizure and was thrown so violently, his forehead crashed into the dry ground and he started bleeding profusely. The silence was chilling as everybody waited out the spams that were tearing through his muscular body. When the spasms seized, a neighbor quietly poured water from a “buta”, (a plastic kettle filled with water for ablution) on his face to wash away the blood. He has survived this one too; and he will rise. 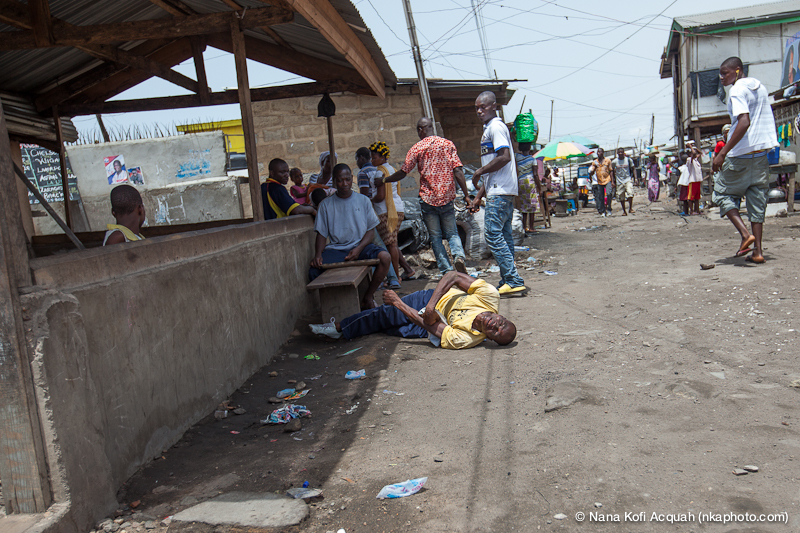 Sometimes, I feel there’s a part of the West that is trying to quickly make up for the years of damage they have done to the reputation of Africa. A lot of them are so zealous, now they don’t mind pretending everything is well with the continent. The truth is, everything is not well. We are on our way but we are not there yet. We have energy. We have youth. We have intelligence and passion and drive and determination and creativity… what we are praying for now, is leadership. 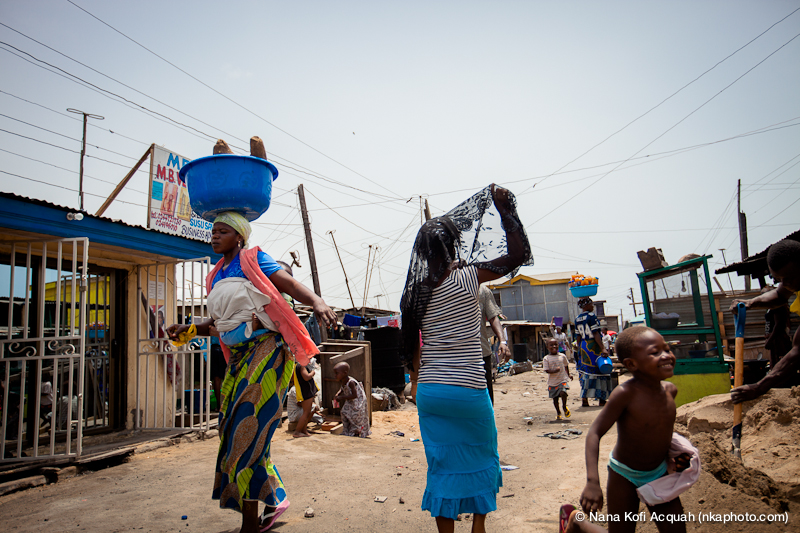 Everyday, we pray for another Mandela, another Nkrumah. We pray for men and women who will make the total liberation and rise of Africa their heartbeat and be willing to live and die to see that come to pass. 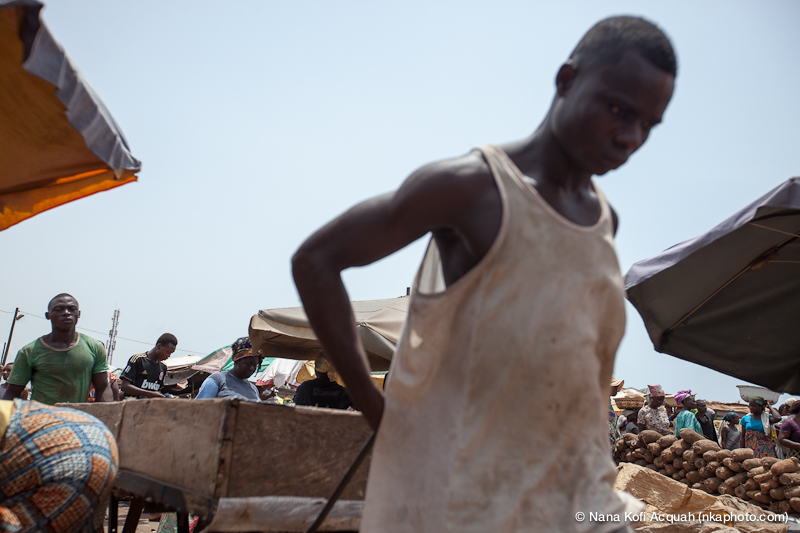 The Arab Spring has clearly proved that the violent, unplanned overthrow of leadership is not the best way forward. A destabilized Africa enriches everybody else but Africa. What we need is a deliberate plan for rising out of the ashes… and I know that we will rise. Africa will rise again. Africa is rising. 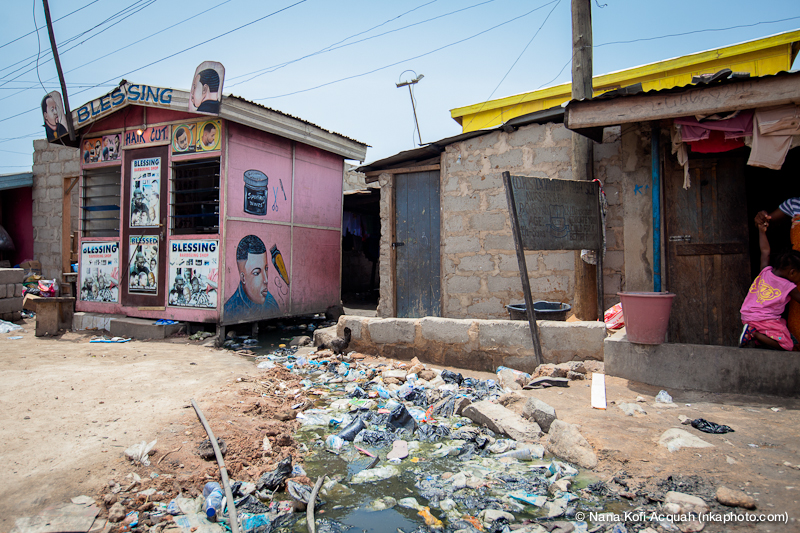 Thought provoking post. It strikes me that the much discussed Sodom and Gomorra does not look so much different to a other untarred backstreets in Accra or Tema. A mother and her child, an unpainted wall. Friends chatting and a hawker plying her trade. And finally, a blessing next to the filth.

Yes Kajsa, Old Fadama is not very different from the other back alleys of Accra and Tema. It has purely been a case of calling a dog a bad name so one can hang it.

A very impressive post. Hard to believe this is a part of a nation's capital. Yet through it all i see the zeal and determination in the eyes and countenance of the people to succeed in life.

Glad i stumbled on your facebook page which led me to your blog. I read you will be coming to Holland, where i reside. Wish i could meet you, eventhough i don't know much about photography. it will still be an honor if my family and i could host you for a day.

There are also pockets slums springing up of which if we don't take care can get out of hand in relation to this Old Fadama issue.In Tema i can count about 3 springing up. One just opposite the Ghana Commercial Bank, Meridian Branch. You can check it out one day. Very thought provoking post. keep up the good work.

the struggle continues, but "we" shall surely get there. Where there is a will there is a way! Africa indeed will rise.

Hi Maame Afua, where in NL do you live. This time, I will be in Groningen and Amsterdam. It will be great to meet you too. Even though I spend a lot of time in NL, I actually don't that many Ghanaians or people with roots in Ghana.

Qwophi, a river will always find its own course. Can't blame the people when there is accommodation shortage in the Capital and beyond.

It was just yesterday that I was having a drink with my coach pal on the top floor of the ICGC snack bar a few moments before we went to the courts to play some hoops...and this was the picture and discussion over the drink; one could see the GCB towers at Nkrumah circle afar and the filth and drudgery nearer..that seems so much like the generic story of Accra..rather unfortunate...

you know why i love your blog? am not even a photo person..i have zero interest in photography..lol outside of taking my own pictures..but i love reading your blog because you give us insight into what's going on in your mind as you take these pictures...that while you do want to capture the moment to reflect your professional talent...there is a deeper dialogue going on in you besides taking a "good" picture.
And for that I say merci from cameroon :)

Great pictures. The last but one picture is particularly poignant, in my view, reflecting the truck-pusher's determination-cum-stoicism towards his plight. His posture seems to say "I have no choice, and I don't like it":-(

nice posting.. thanks for sharing.