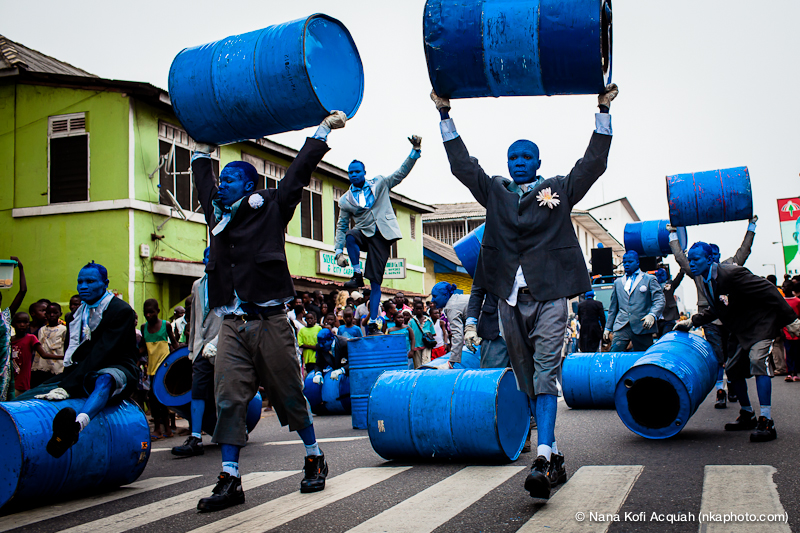 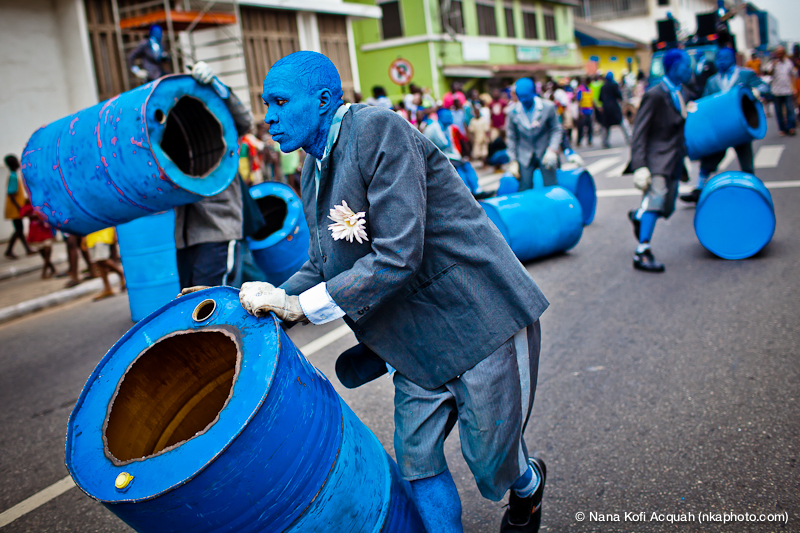 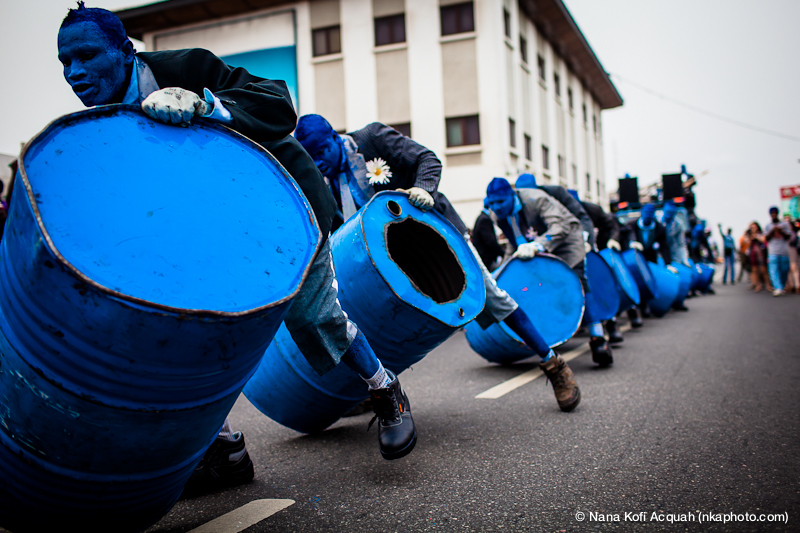 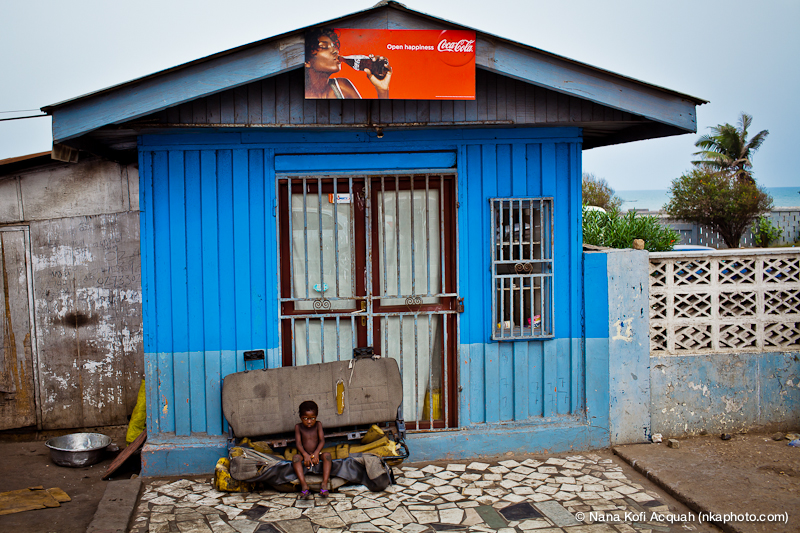 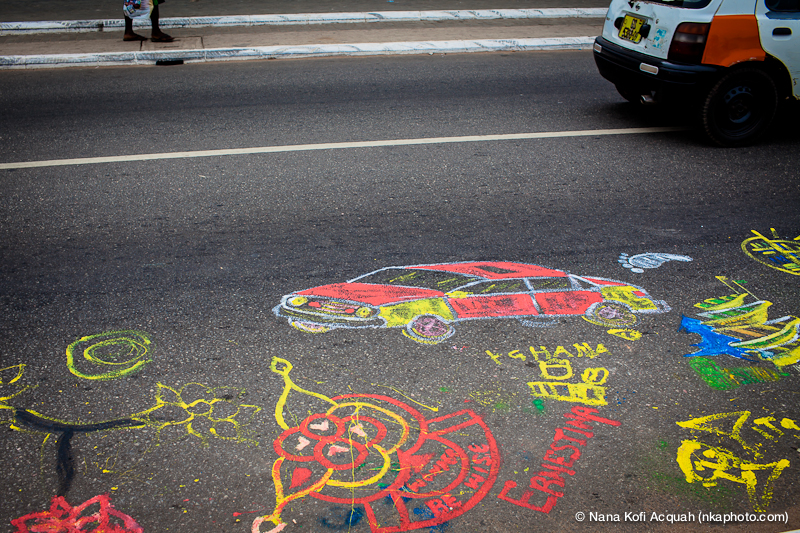 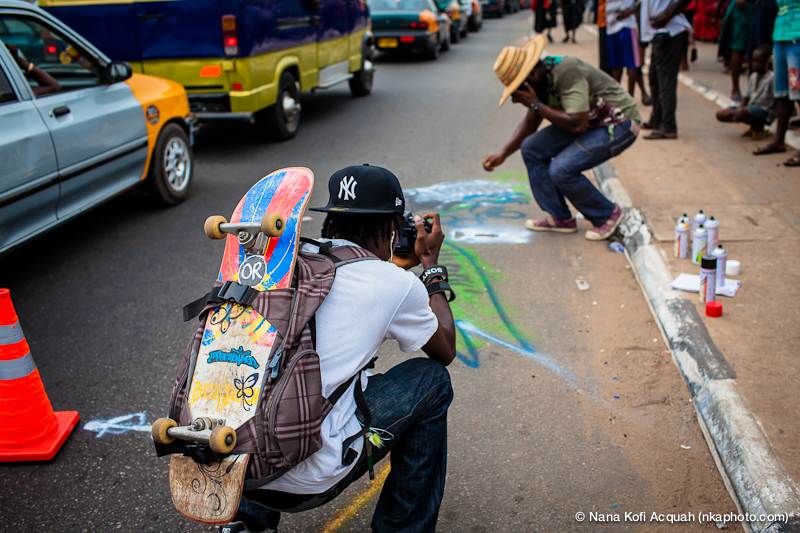 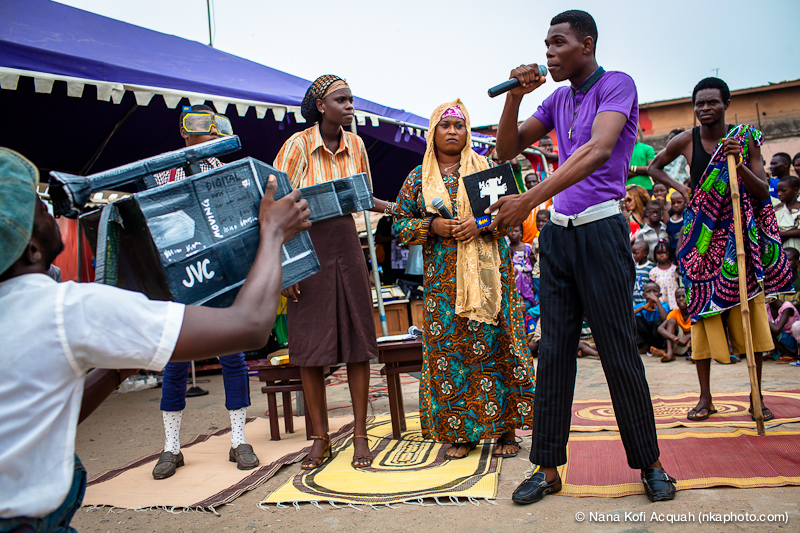 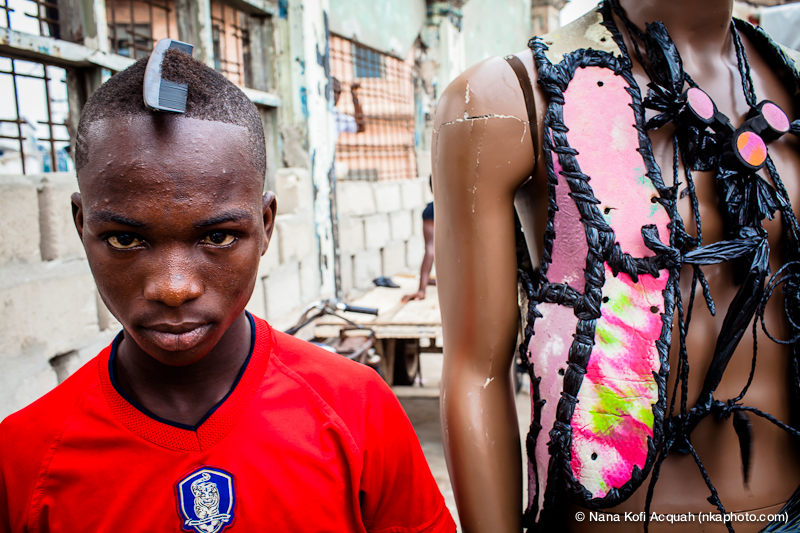 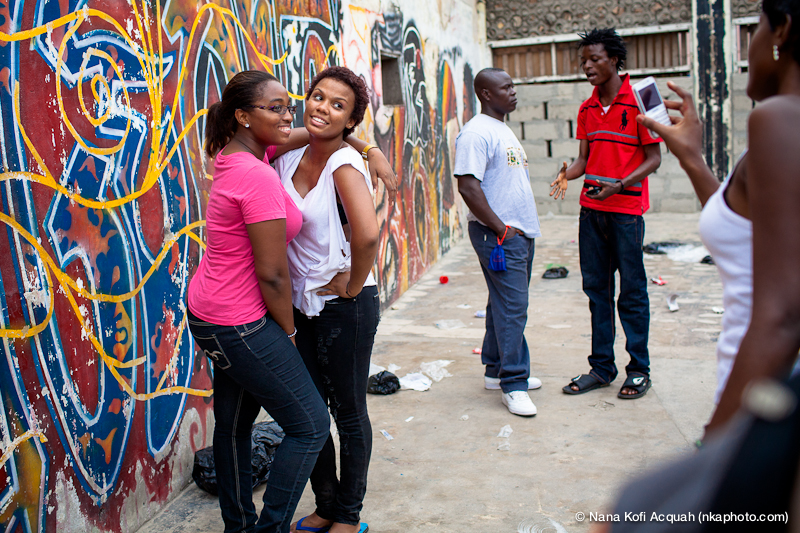 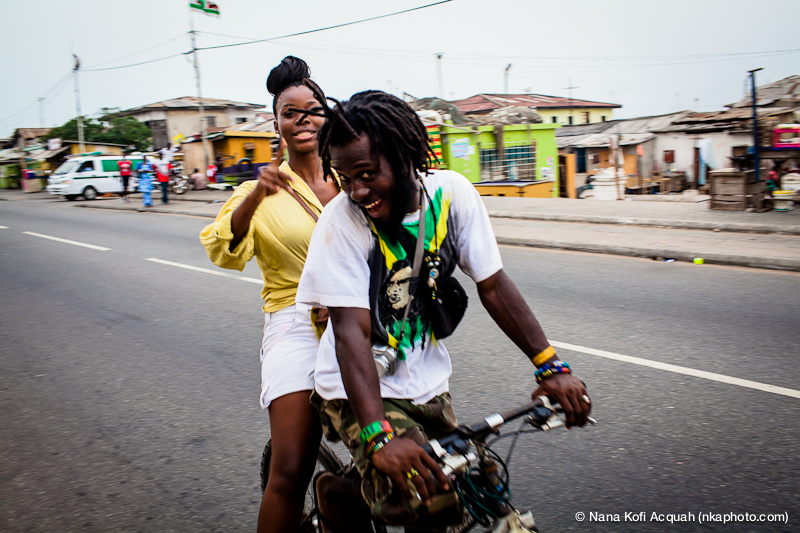 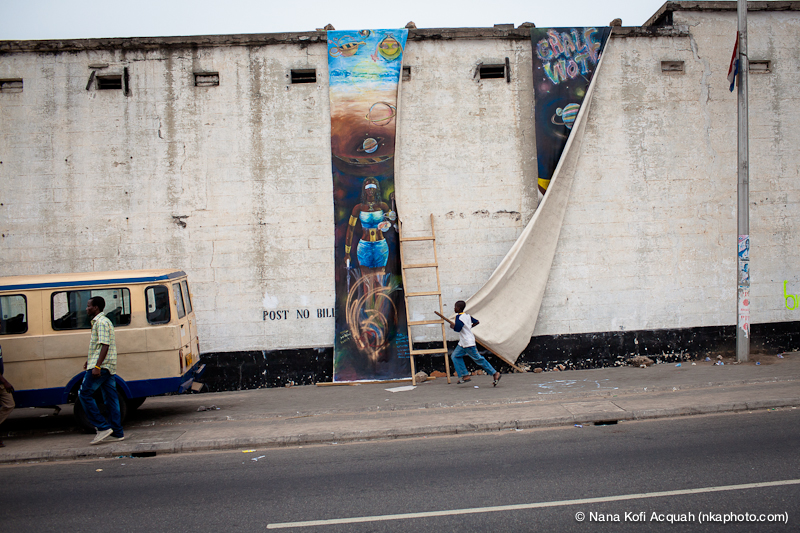 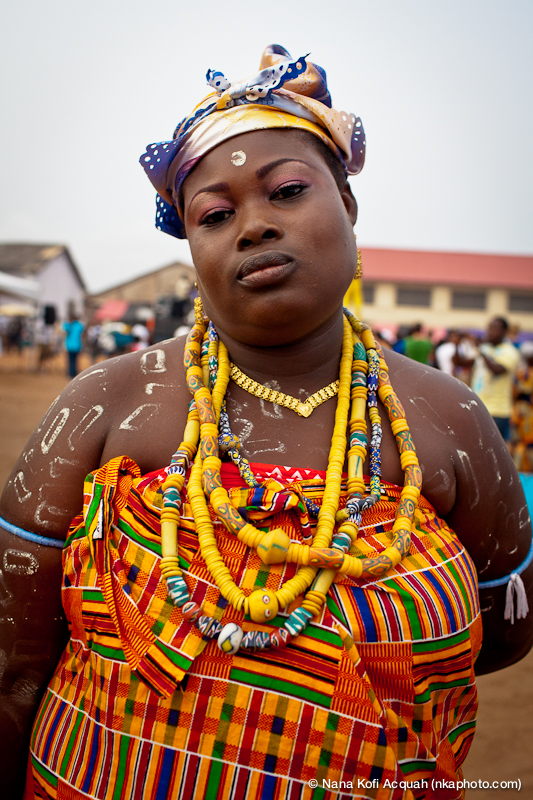 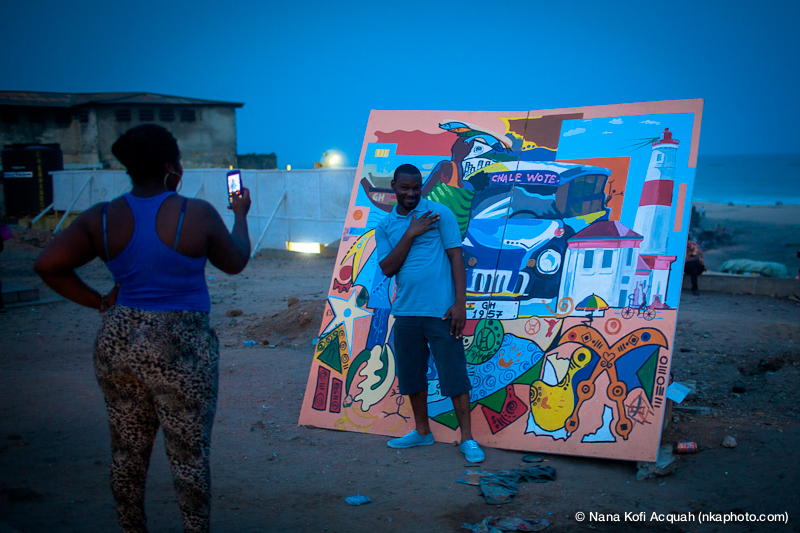 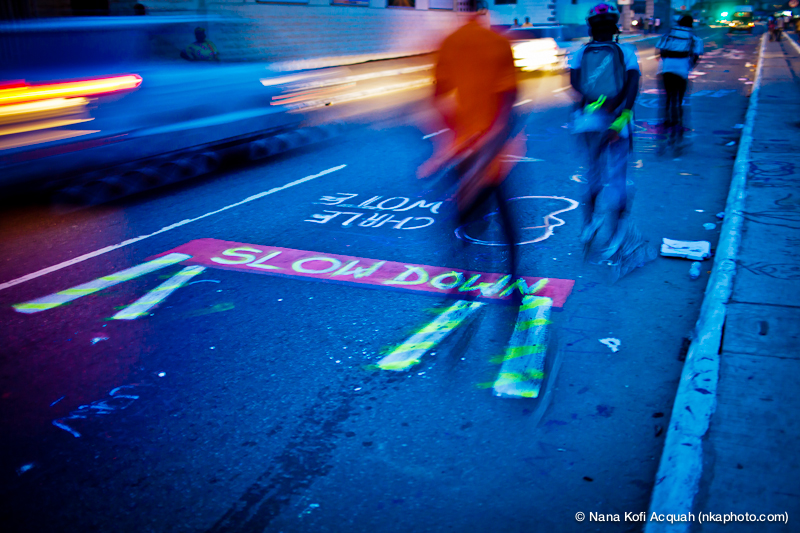 eh, did you get model releases from those people eating dinner????

Great photos NK. And Nyani's right, we like you too much to lose you to an Accra pavement! HELMET HELMET HELMET!

Great to see the pictures here. I have been waiting for them since I couldn't make it this year. I love your narrations too.
PS: Nana Kofi, we met at a wedding this Friday I hope you remember Nana Kwame.

@ Nyani, I can't wait to see some of your shots. When will they be up on your blog?


@ Fiona, thanks to Nyani, now I have a whole box of model releases :) Wanna sign one? :) On helmets, I once rushed a man to a hospital in cape coast, after a car run into his motorbike. His helmet split in two. I guess if you time has come, it has come. The poor fellow didn't make it.


@ Nana Kwame, I remember you and your loooooong lens :) The long lens bit was just to let you know, I really remember you :)

Very sweet photos, except you didn't shoot me some!

hi Nana- The Festival actually started before scheduled time-10am. You wouldn't have missed so much had you come earlier. and statements like "it is after all, a Made in Ghana product" are not helpful especially when you didn't follow the build up the the festival and came in late.your piece tells a lot about how you experienced CHALE WOTE- you missed out on a lot.And maybe you should have asked people who were there at 10am.Nice pictures by the way.

Love the photos and narration

@ Anonymous, my reference to "Made in Ghana" is meant to be what it is. If we're comfortable taking swipes at the Chinese all the time for their sense of quality (and Ghana can't compete with them on quality), I can't see why I have to pretend we make great products in Ghana. I am mostly positive about this Nation and this Festival because both are young, and serious works in progress. And a little criticism, a little encouragement is how we're going to get there. No?

Nana i don't even understand what you are talking about now- what's the link between a street art festival and Chinese products? i don't see the logic here. How are you making this about taking swipes at the Chinese? really?If you don't think much of something you shouldn't be all over it taking photos. get a handle on information gathering and asking questions when you don't know. how about admitting you made a mistake-

aaaahhhhhhhhhhhhhhhhh i missed the show this year too.... waiting to get a spot to do my grafiti......charleworte ...big uppd nana
BONTWES is my name

@ Anonymous, I have a policy on my blog where I don't like responding to posters who don't properly identify themselves... I made an exception for you and did respond. Please identify yourself in your next comment.

Now, to your statement. I think there's a solid link between Made in China Products and Street Art Festivals. Why not? Chale Wote is now a brand; and I can't wait for it to grow into one of the world's strongest street art festivals. It is a product; and one with massive potential... but it is not perfect. Not yet. I referred to how we generally take swipes at the Chinese because we ALL do. We used to take swipes at the Japanese until they couldn't be taken for granted anymore. The Japanese stopped their critics by getting better not by throwing tantrums.

Now, we have a tendency in Pan-African circles to be criticism intolerant. That will not help us. Did you see the photo exhibition part of the Festival? It was an eyesore. A bunch of photographs printed on ordinary A4 sheets, stuck on plywood. Did you notice the traffic congestion that was caused when Generik Vapeur were coming? Don't you think totally blocking the street or placing diversion signs could have saved all those motorists the trouble? Were you there at night? Poor Lighting, Poor Security. No ambulance (at least I didn't see one for all the 4+ hours I was there). Did you see those rolling barrels at the end of the Generik Vapeur performance that forced old ladies and children to dash for their lives? Luckily nobody was injured but it was unnecessarily dangerous. I have photo evidence if you want to see it all.

There's more I can say but it's not worth it because
I know how much energy and effort the organizers put it in, and if you go back to read my post, I have said I think they deserve an award. BUT IT CAN BE BETTER, just like most Made in Ghana Products! I told Kobby Graham at the event, that I had been looking for an itinerary but couldn't get one. I know I was not the only one who came to the place, not knowing where to go for what and what was next.

Now, if you saw me "taking photos all over", it is because I believe in the concept. Or would you advise I wait for it to be perfect before I come on board?

If we want the world to take seriously, just like the Japanese, we've got to grow up, which is exactly what the Chinese are doing with their Made In China products.

Love the photos... & the commentary too.

It was my first time too and so i have nothing to compare it with, but I had a great time and was very pleasantly surprised.

The event DID actually start on time. It was the people who came so late that I was even worried at a point! Returned from an errand to find the place popping OFF though... Phew!

There is definitely room for improvement and lessons to be learnt.

IMHO the criticism helps, especially when balanced out with such beautiful encouragement and support.

@Nana Kofi Acquah - Clearly a good day's shooting for you and your one lens. I'll blog soon... Some blogging inertia to be overcome!

On the subject of helmets, I survived a mountain bike crash a few years ago that saw my helmet split cleanly into two equal halves. Had it not been for the helmet...

I support your policy on anonymous posters - if people aren't prepared to stand behind the things they say, they shouldn't say anything at all.

@ Nyani, next time, I will ask for a helmet before I hop on the back of an Okada, I promise.

Nana! Thanks for this beautiful and well thought out post. I LOVE your photos. Especially the last one. And the one I imagine with the coffin. And I'll sign a release form anyday! Agree totally with your response to the anonymous commenter, Chale Wote is a brand with an amazing potential, now letslook at how it can be improved! Will directthe organizers to yourcomment as it summarized my feelings exactly. Great seeing you as well!

Nana, where's that place where Nyani was hanging with his family? What's it called?

Kobe, that is Osikan. Opposite Barclays Bank, High Street, Accra.

I just wanna drop a quick thank you for your beautiful photos and blog. I was lucky to visit Ghana in 2010. Loved every minute of it. Found your blog by looking for some photos of labadi.....my daydreaming ritual these days=)